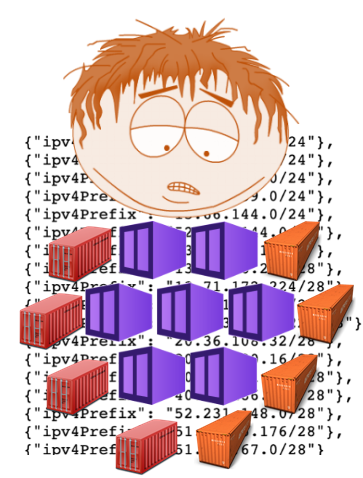 One of the top concerns I see from companies when architecting AKS is running out of IP addresses. This is commonly known as IP exhaustion. This concern would come up when selecting the network model for AKS specifically with Azure CNI.

Companies would lean towards Azure CNI at first but quickly opt for Kubenet. Azure CNI provides benefits on Azure. It has deeper integration between Kubernetes and Azure networking. With Azure CNI you don’t have to manually configure routing for traffic to flow from pods to other resources on Azure VNets. Pods get full network connectivity and can be reached via their private IP address. Supports Virtual Nodes (Azure Container Instances), it supports either Azure or Calico Network Policies and Windows containers. Azure CNI does however require more IP address space. The traditional Azure CNI assigns an IP address to every Pod from a subnet reserved for pods or pre-reserved set of IPs on every node. This method can lead to exhausting available IPs.

The alternative to Azure CNI with AKS is Kubenet. A lot of companies opt for Kubenet to avoid IP Exhaustion as it conserves IP address space. Kubenet assigns private IP addresses to pods. It does not have routing to Azure networking. In order to route from pods to Azure VNets you need to manually configure and manage user-defined routes (UDRs). With Kubenet a simple /24 IP CIDR range is able to support up to 251 nodes in an AKS cluster. This would give you support IPs for up to 27,610 pods (at 110 pods per node).

Here is a side by side breakdown of Kubenet and Azure CNI:

As you can see you can get a lot more pods on Kubenet and you will burn through a lot more IP’s with Azure CNI. One would think when using Azure CNI to just assign a large CIDR for the subnets like /16 instead of /24. This would work however most IT teams in the enterprise that are connecting AKS to existing networks don’t have that option based on the existing IP design and are stuck working with smaller IP address ranges they can use.

With Azure CNI overlay networking IPs from an Azure subnet are assigned only to the nodes in the AKS cluster. The pods do not get IPs assigned from an Azure subnet on the VNet hosting the nodes. Instead, the pods are assigned IPs from a private CIDR range that is different from the VNet hosting the AKS nodes. This design conserves IP address space from the VNet. A routing domain is automatically created for the pod’s private IP CIDR range in the Azure networking stack. This creates the overlay network for the pods facilitating pod-to-pod communication but not outside of the overlay network. Communication between the pods and resources outside of the overlay network is done using node IP through Network Address Translation (NAT). This new design allows for east-west and north-south traffic with AKS while saving IPs.

Here is a side-by-side breakdown of Kubenet and Azure CNI Overlay (from Microsoft Overlay doc):

For a deeper dive into Azure CNI Overlay for AKS visit the official documentation here: https://docs.microsoft.com/en-us/azure/aks/azure-cni-overlay

That brings us to the end of this blog post. If IP exhaustion with AKS is a concern give Azure CNI Overlay a try. Also, keep an eye out for updates on Azure CNI Overlay. Hopefully, it will release to GA in the near future.