Savision just released a video they put together of interviews with several MVP’s from TechEd NA 2014. MVP’s in the video include:

The video was to gather our opinions on the following topics:

You can watch it here: http://www.savision.com/resources/news/watch-video-mvps-unplugged-teched-na-2014. 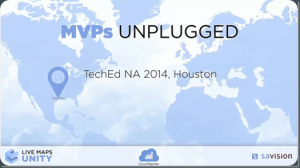 Thanks Savision for the opportunity to be a part of the video and for supporting community!