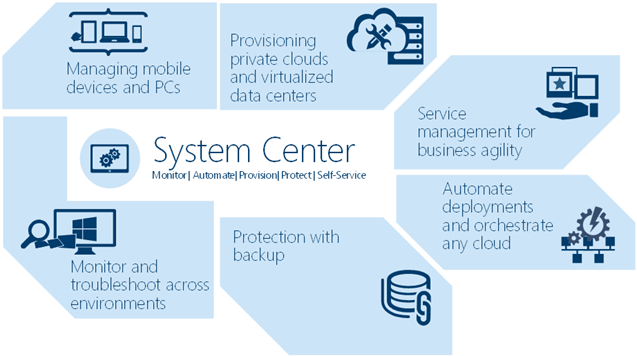 SCCM: Support for Windows 10 and a plethora new MDM features. 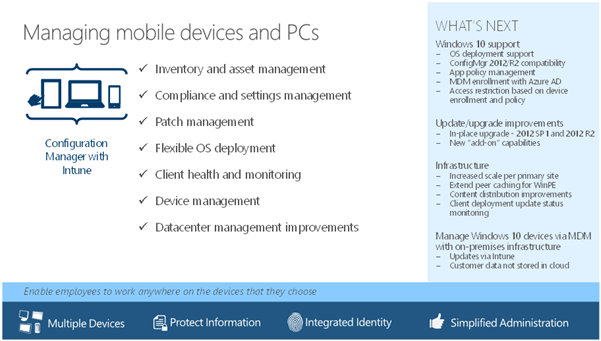 Automation: Graphical authoring. How cool is this!, DSC Push/Pull servers now in SMA and you can manage DSC in SMA, Role Based Access Control. 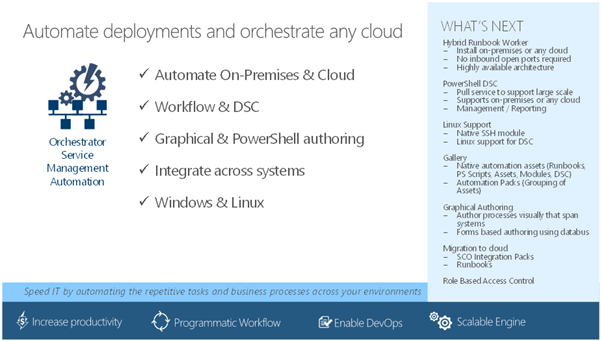 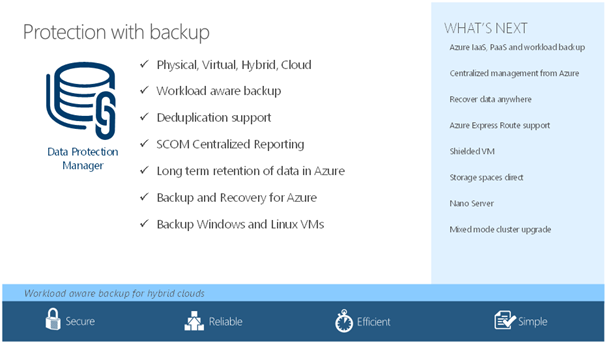 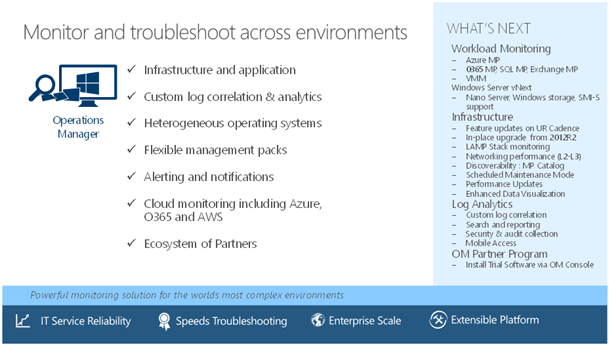 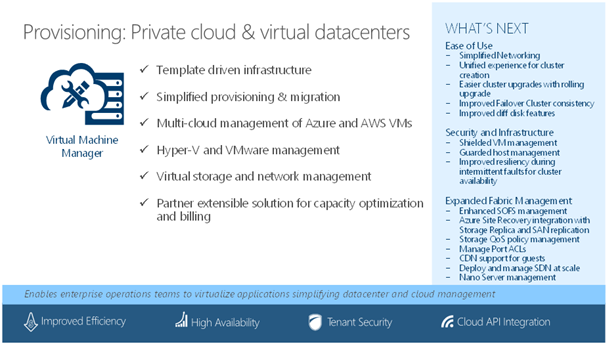 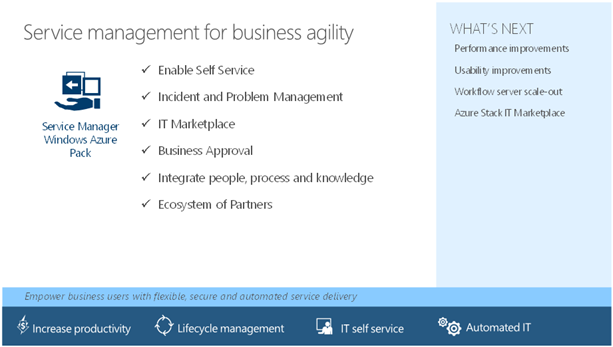 Now with that being said take a close look at the following screenshot and notice cloud technologies that have been introduced into this story. We will discuss this more later in the post. 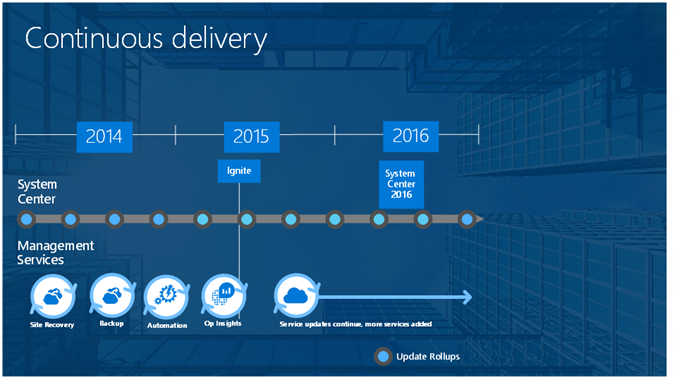 The world of business has been transforming with the explosion of mobile devices, cloud technology and the workforce becoming more tech savvy. In this new world IT is forced to keep up and move at a faster pace than ever before. This is touching all facets of IT included the management layer. Microsoft knows this and is ahead of the curve being committed to help us IT pro’s stay at the forefront of this shift. You can see this happening across all of Microsoft’s technologies and System Center is no exception.

We are seeing a shift of Traditional IT management to Modern IT management. The System Center stack also needs to make this shift enabling us to effectively manage IT operations regardless if they are Microsoft, Linux, Unix, Mac, on-prem, or in the cloud. Microsoft is making that shift with the stack and helping us to stay ahead of the curve. The following screenshot represents how Microsoft is making that transition for and with us. We can be confident to invest in System Center at an organizational level and a personal career level knowing Microsoft will continue to evolve the toolset. 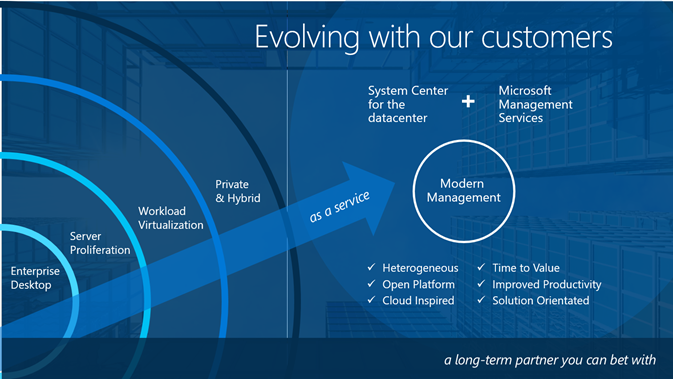 The OMS components span on-prem and cloud so regardless of where your infrastructure is you will be able to manage it.

For example Operational Insights collects and stores data from your on-prem servers and gives you an easy interface for organizing and visualizing all of the data collected. Azure Backup can protect on-prem servers and back that data up to Azure it also has the ability to integrate with DPM. Azure Site Recovery is disaster recovery protection for virtual machines and has some integration with VMM. And Azure Automation is PowerShell workflow that can be used to automate on-prem or Azure IaaS.

OMS is true unified IT operations management across on-prem datacenters and public clouds because it touches on-prem or cloud and integrates with the System Center stack. For an overview of OMS visit:

The following slide is from one of the Platform Vision & Strategy Ignite sessions and gives you an idea of where OMS is headed. The future direction of OMS is to give us the ability to manage any cloud offering regardless if this is Azure, AWS, VMWare’s private cloud, OpenStack’s private cloud and of course Microsoft’s private cloud. 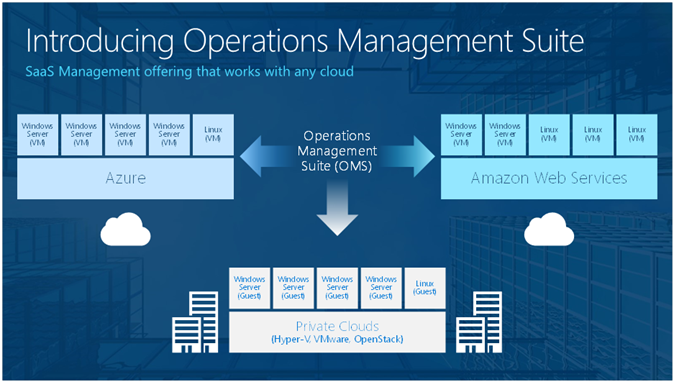 The following two slides display the journey and different management workloads that will flow into OMS. Take note as this gives a lot of insight into the direction of OMS, System Center, and where you should start to focus your time to stay competitive from a skills standpoint. 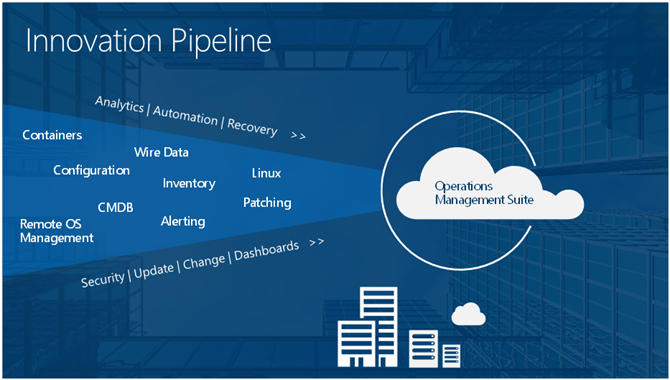 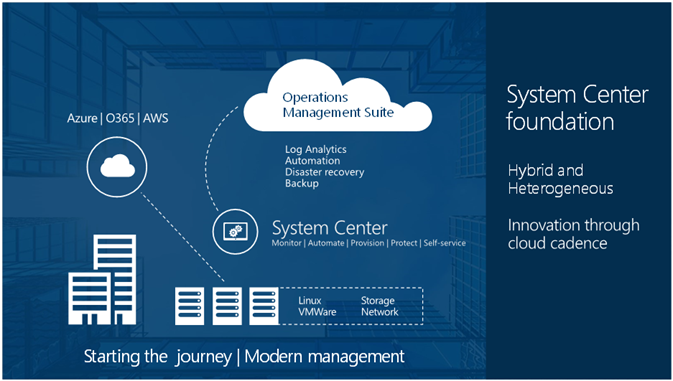 This next slide represents Microsoft’s commitment to continue development for System Center. At the same time Microsoft will also continue to develop OMS and give us a way to transition to OMS at our own pace and at the pace of our customers. 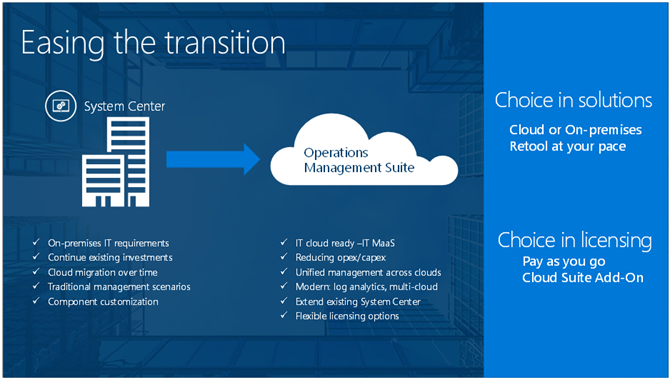 The writing is on the wall more and more management of IT is moving to the cloud and who knows maybe someday it will all be out there. For now continue to invest time into System Center but also transition to OMS in areas that make sense for you to do so.

For the full channel 9 videos on the two Platform Vision & Strategy sessions I referenced throughout this post visit: