I recently built a PowerShell script that creates a discovery report for System Center Service Manager. The idea behind the script was to have something that I could run to gather all of the information I would want about a Service Manager deployment. I searched online and could not find anything so that’s when I decided to put something together.

This report can be used by consultants doing assessments or SCSM admins as an easy way to document what you have in your environment. This is a first pass at the report so it is version 1.1. I plan to add more information/functionality to the report in the future. Keep in mind I am not a PowerShell expert so feel free to take the script tweak it and share your updates with the community.

The script will run on Service Manager 2012 SP1 and above. It uses SCSM 2012 SP1/R2 CMDLETS along with SMLets. If you don’t have the SMLets installed you can download them here: https://smlets.codeplex.com/

Discovered in the report:

These are the sections of information in the report.

This will take you to an online example of the report.

Here is a screenshot of the report. 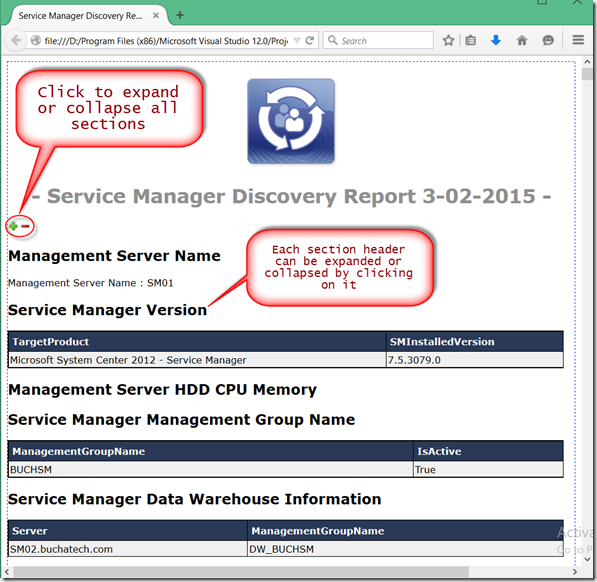 NOTE: The PowerShell report is provided AS-IS without warranty of any kind. It is recommended to run in a lab environment before running it in a production environment.

“The ScsmPx module facilitates automation with Microsoft System Center Service Manager by auto-loading the native modules are included as part of that product and enabling automatic discovery of the commands that are contained within the native modules. It also includes dozens of complementary commands that are not available out of the box to allow you to do much more with your PowerShell automation efforts using the platform.”

This module contains hundreds of new commands for Service Manager.

The module was built by Kirk Munro (@Poshoholic) and sponsored by Provance.

The module is very easy to install and can be done so by running this syntax from PowerShell on a Service Manager management server:

Running that will download and install the SCSMPx and SnippetPx modules. This is for all users and requires being run from an elevated PowerShell console. This module will auto-load (PowerShell 3.0 and above) so there is no need to run Import-Module to load it.

The commands included in the module are: