DPM’s data protection is facilitated by the Volume Shadow Copy Service (VSS). Therefore VSS is the secret sauce. VSS is in OS’s and Microsoft applications such as Exchange, SharePoint, and Hyper-V have their own VSS writers. Yes this may be old news as the VSS technology  has been around for some time but many IT … Read more

In this blog post we are going to walk through setting this up. It is a simple two step install installing the hotfix on the DPM 2010 server first and then the console on the workstation. Here is the process: 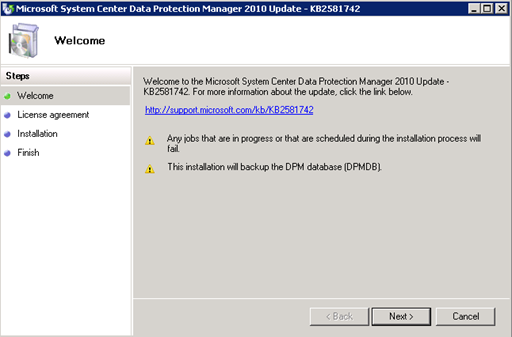 Open up DPM 2010 after the hotfix and verify it is still working.

Now the DPM 2010 server is ready lets install the console on the client machine.

Here are the steps:

Navigate to the DPM 2012 Beta install and chose 32 or 64Bit depending on what your workstation is.

Launch the DPM 2012 Beta install on your local workstation. 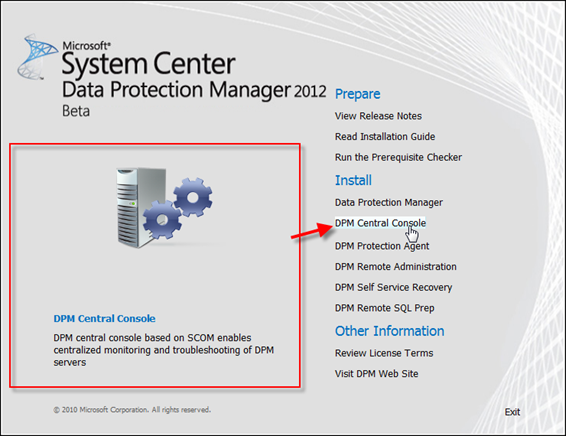 I recently ran across a thread on DPM TechNet forums with a topic on how to access DPM alerts.   They wanted to monitor DPM errors and events. You can use a third party tool to do this or you can use System Center Operations Manager/Essentials . If you have the option to use System Center … Read more

dBeamer!DPM is a third party tool that is added to your DPM to extend its functionality. dBeamer!DPM was made by a company called Instavia Software Inc. Instavia creates virtualization and availability tools. dBeamer!DPM can be used to add your DPM as a part of your High Availability (HA) infrastructure by increasing your RTO to near 0. dBeamer!DPM allows you to recover data even if your DPM services or DPM database is down and gives you the ability for the data to be used the minute it starts being restored.

dBeamer is the technology underneath dBeamer!DPM. dBeamer uses an operation called BEAM that allows you to copy data such as files, folders, virtual machines and database to a different location and this data is made available instantly. Another example is that you could start a BEAM of a video and begin playing it while it is still copying over. So for example a user could start reading or modifying Microsoft Word documents or a live database while the data is still being copied. dBeamer BEAM technology works regardless of the size of data that you are copying.

dBeamer has a pause and resume operation to head of loss of data during a BEAM. For example if data is being beamed over a network and network connectivity is lost dBeamer will pause and then resume when connectivity is restored. dBeamer is integrated right into Microsoft windows through a windows explorer extension. dBeamer also has a scripting and command line tool so that you can automate the initiation of a BEAM operation.

You can start the dBeamer BEAM operation one of three ways:

3. Using the dBeamer application itself

dBeamer runs on NTFS and requires 4GB RAM minimum to run. dBeamer uses a large amount of RAM to perform the BEAM operations and that is why there is a requirement of at least 4GB of ram. The more RAM that is allocated on machines that are beaming the better performance you will get. dBeamer is supported on these following operating systems:

Enough about dBeamer itself let’s look at how this technology actually works. This is what happens when dBeamer performs a BEAM operation:

Step 1: A BEAM is initiated to copy data from one location to another.

Step 2: dBeamer creates a virtual local file view of the data that is being beamed on the destination.

Step 3: Once the virtual local file is completely created in the destination it can immediately be used.

Step 4: On the destination when portions of the data that is being Beamed is needed dBeamer then fetches the needed data blocks on demand allowing for continues access of data that has not even been transferred yet.

Step 5: dBeamer continues to simultaneously copy the data content in a sequential fashion without overwriting the modified contents of the virtual local file, once the BEAM is complete dBeamer stops and the data in the destination is completely beamed over as a whole. 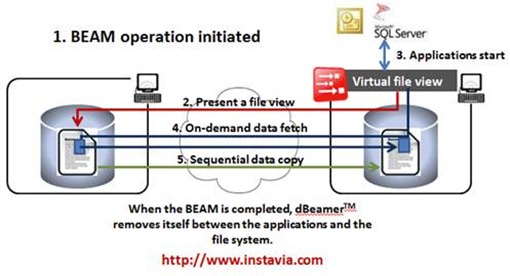 I have seen issues on DPM forums where others have recovered from DPM failures and their protected data becomes inactive or other issues such as the data suddenly becoming inactive on its own placing the data in a category named “Inactive protection for previously protected data”. It is not clear how to mark protected data … Read more

We all know that DPM can protect basic Windows Servers 2003 through 2008 R2 including files, folders, and critical server components like system state and do BMR’s of servers. DPM can also protect Windows application specific workloads. I often see confusion or questions in forums about the applications that can be protected natively by DPM. In this post I will set out to list the applications DPM protects natively and list resources to other common applications and where to get the information on properly backing them up.

Yegor Startsev has completed a new post on how to use Dropbox (www.dropbox.com) as a cloud backup solution for DPM. This is done with the help of Firestreamer (http://www.cristalink.com/fs/). Yegor does a good job of detailing out the solution and design and then how he was able to set this up so that you can … Read more

I saw a post today on my friend Yegor’s blog about Microsoft converting their entire internal data protection to DPM 2010. Here is Yegor’s post: http://translate.google.com/translate?hl=en&langpair=ru|en&u=http://ystartsev.wordpress.com It is good to see Microsoft "Drinking the Kool-Aid" by relying solely on DPM. There is some really good data in this case study and shows the true savings … Read more

How do I manually remove a DPM agent from DPM after the protected server is gone? They de-commissioned a server and forgot to uninstall the DPM agent before taking the server down. Now the DPM console has a stale agent record in it. I have had a few people ask me how to remove these … Read more

My first book “Microsoft Data Protection Manager 2010” will be coming soon sometime in May  of 2011. A big thanks to Islam Gomaa, Robert Hedblom, and David Allen for being a part of this project. To find out more about the book CLICK HERE